We know there are plenty of fake Google business listings out there. But do they really impact many businesses in a negative way? Since they don't have any real business behind them, and given proximity is a ranking factor, is their influence on Google Maps very localized to their immediate area?

With this post we will demonstrate how some fake listings rank strongly enough to have a very large coverage area which pushes many legitimate listings out of the 3-pack. Because the Google algorithm uses the exact match keyword as a strong ranking signal, it is relatively easy for fake keyword stuffed business names to outrank legitimate businesses across a wide area.

So let's get right into it…

Let's start with a phrase that is often targeted for personal injury lawyers: "slip and fall lawyer". I've situated the search in Jacksonville Florida. You'll notice that all three listings (not counting the ad) are in fact fake keyword stuffed listings. 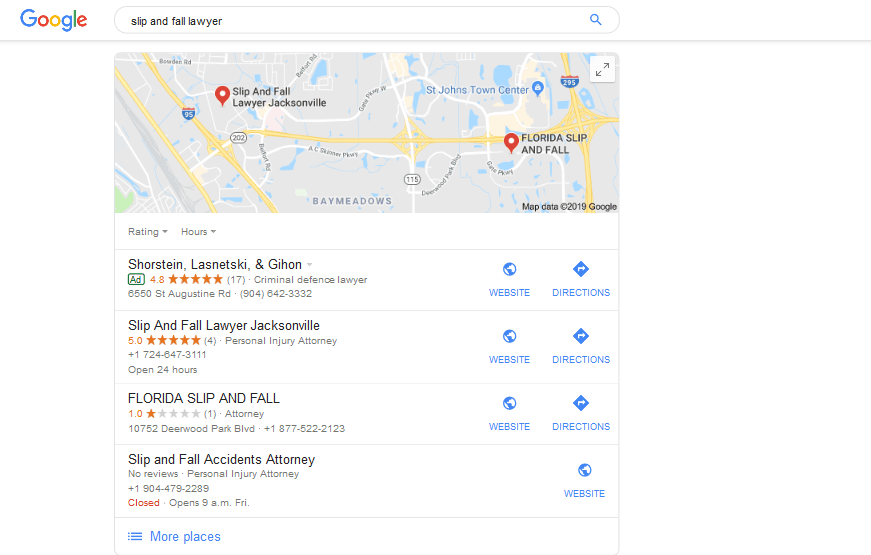 When opening this up using 'More Places', we see this Maps result: 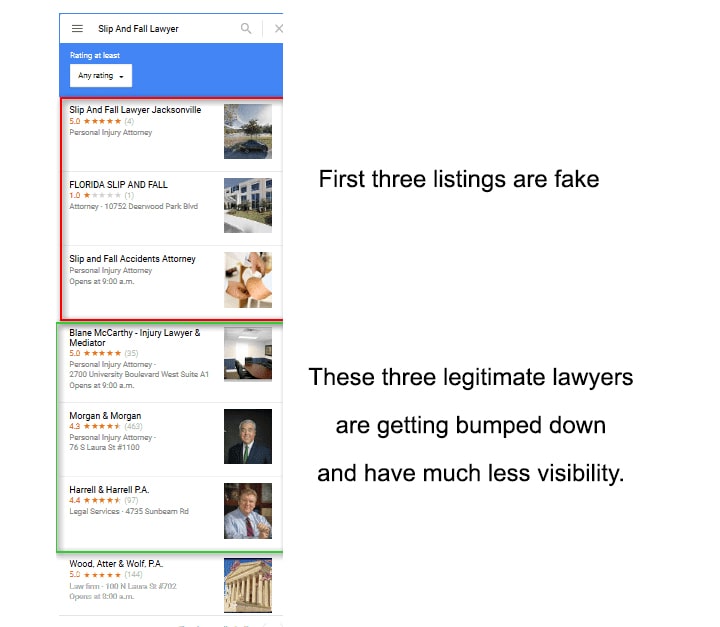 Finding a 3-pack with only fake listings is not that common but as you can see they still exist.

But how large of an area do these fake listings actually rank in the first three placements for? Since proximity is a ranking factor for Maps, maybe they only rank well near their location?

Let's take a look at the first one on the list. Using our area scan, Slip And Fall Lawyer Jacksonville, actually ranks in the three pack across all of Jacksonville in the first and second spots for this keyword! 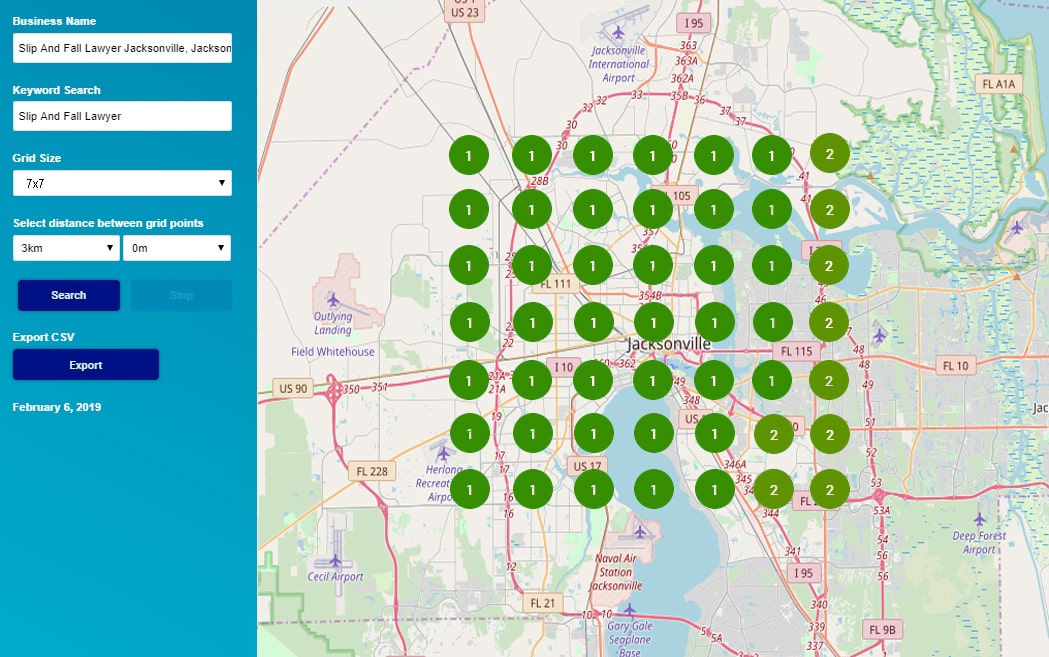 How about number two, FLORIDA SLIP AND FALL? Well, they stay in the first or second spots across the entire city as well, basically alternating with the previous fake business. 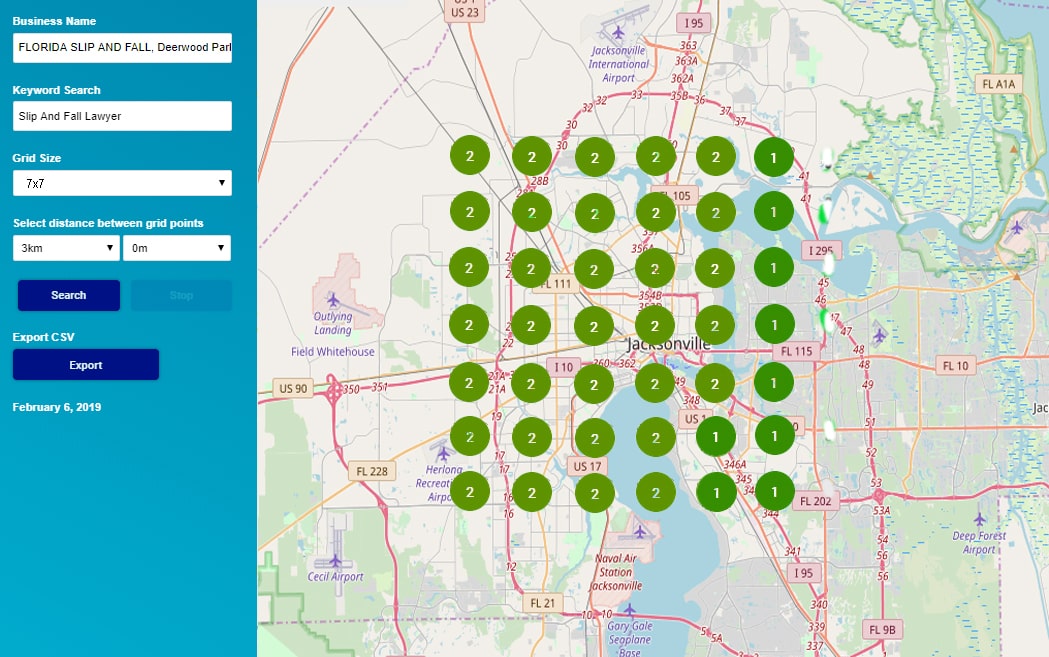 A fake listing across the city, might still be impacting your business significantly.

Not only is it the number of fake listings that are an issue, but you need to think about their coverage area as well! In this case, every single personal injury lawyer in the entire city of Jacksonville that cares about getting 'slip and fall' accident victims as clients are being impacted by these fake listings. Not sure how many there are, but seems like there would be a bunch.

A listing that seems too far away to care about, can become a problem quicker than you think.

The first 'More Places' screenshot shows that there are only seven listings matching on 'slip and fall lawyer' on that zoom level, three fake ones and four legitimate ones. However, other more local parts of the city will see many different law firms on the list for that search.  All of those listings are being pushed off the front page.

Here is a search done in the north part of the city. The blue dot on the map is where the search is being simulated from. 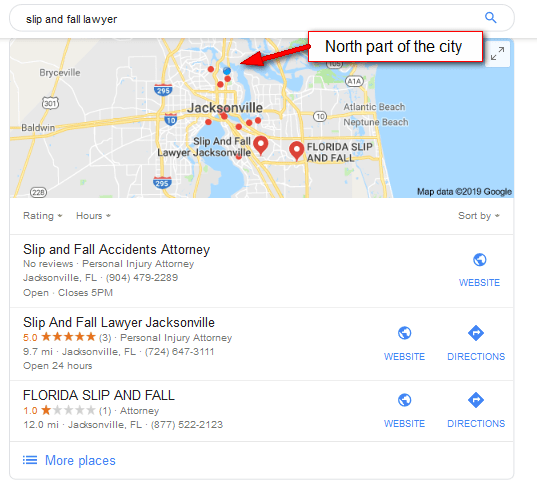 And with this screenshot, you can see who exactly is getting pushed off the first page for this query at this location. I've highlighted in green the legitimate listings. 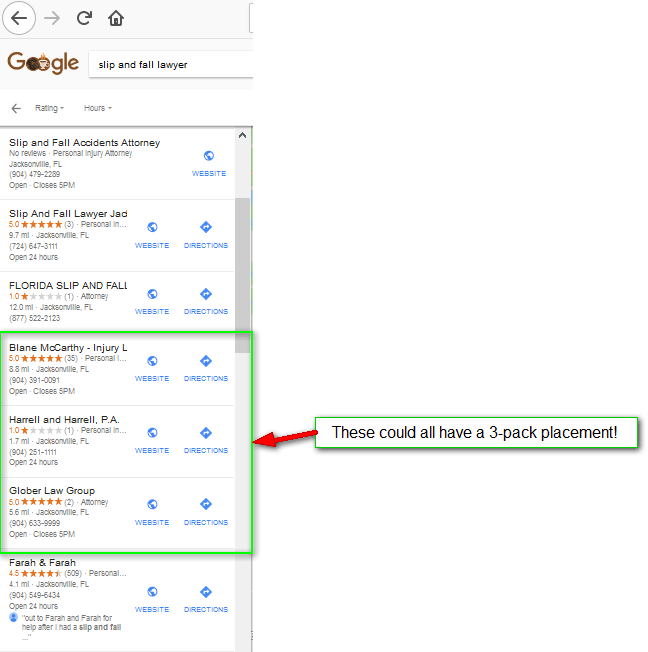 Here are a few more screenshots showing searches from various points across the city. 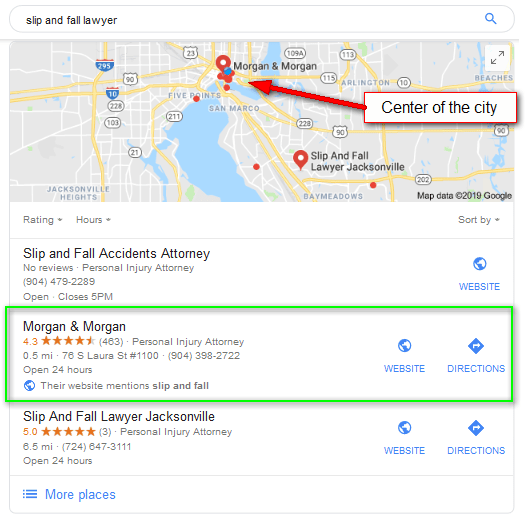 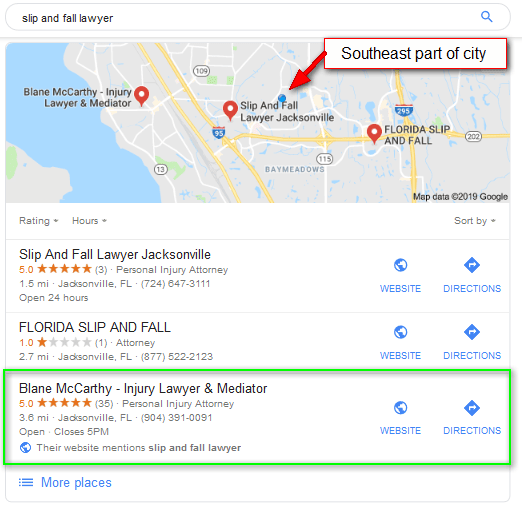 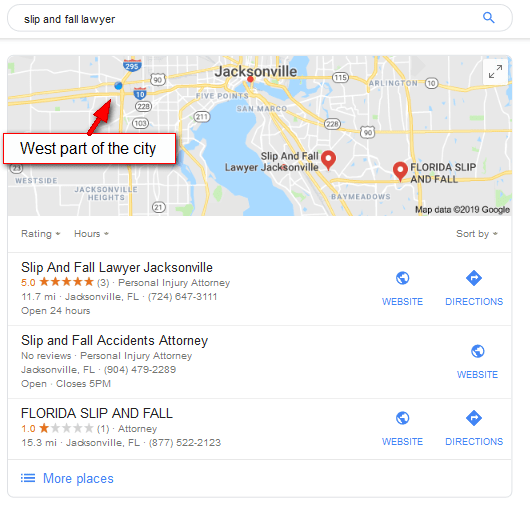 Out of nine possible placements, only two are legitimate listings! Practically all 'slip and fall' searches done in this city will see fake listings dominating the first three spots.

What's the Positive in this GMB Example?

Happily, the example above is not that common. The good news is that spam listings won't usually rank well for such large areas for primary keywords. For example, if we did a search for 'personal injury lawyer', the number and strength of so many legitimate businesses will keep a spammy listing from having a large coverage area. This especially the case in larger metropolitan cities where there are many businesses competing in the same industry.

But for many secondary keyword phrases, there are often fake listings that will dominate an area because not as many websites are optimized for them. Imagine many fake listings across a city using various keywords each creating their own area bubble that bumps down dozens if not hundreds of businesses from a spot in the three pack across different locations in the city. 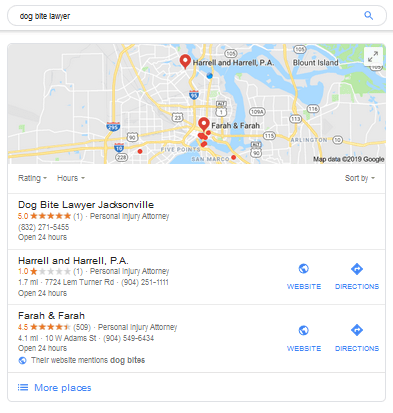 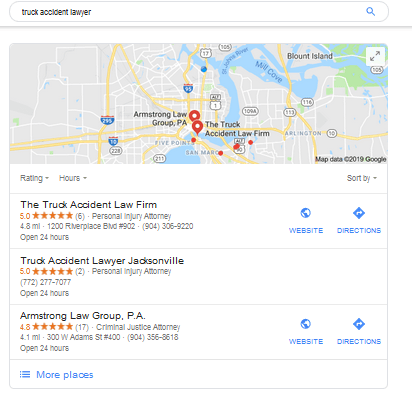 It's pretty obvious that no one has cleaned up lawyer spam in the city of Jacksonville recently.

More good news is that spotting and removing fake listings such as the ones above is relatively easy. Since they are trying to match on exact query searches, the chances that these are actual business names is extremely low. Reporting them to Google will get them booted off and all the other listings below will be moved up accordingly.

There are a few ways to report fake listings to Google, the first would be to flag the listing and wait a few days. If the listing has not been removed, you can always send a message to the Google My Business Twitter or Facebook support team.

Google My Business Spammers are Not Invincible

GMB spammers are hard to permanently deal with and they will keep coming back because the rewards are too great. You really need to regularly monitor your keywords and get rid of fake and keyword stuffed listings as soon as you find them.

Local Falcon does a good job of scanning a wide area for you to be able to quickly see which areas are in need of attention. However, since our tool does not pick up businesses that hide their address, which is a common tactic of spammers, going to the source and performing actual searches on Google to see the actual rankings is also necessary as well.

Yes, Google should be doing a better job. But while you are waiting for Google to deal with this problem, working on other SEO optimization tasks (or out getting shrubberies), the spammers are getting clients that could be going to your business.

Reporting fake listings benefits all the legitimate listings in a category, so spending resources to help everyone may not seem like something you would want to do. However, the longer a fake listing is live and possibly accumulating fake reviews, the stronger it will grow and the larger the coverage area becomes. If no one takes up the task, you get 3-pack results like we saw above.

I've spent my fair share of fighting and reporting fake listings. Many local SEO marketers routinely remove fake listings from Google Maps before it becomes even worse as well. Everyone benefits when the field is clear of spam. I'd be happy to hear about your experiences dealing with fake listings and any improvements you have seen for your business after they have been removed.

Return to all Blog Entries

Try it Out
Pricing
FAQ